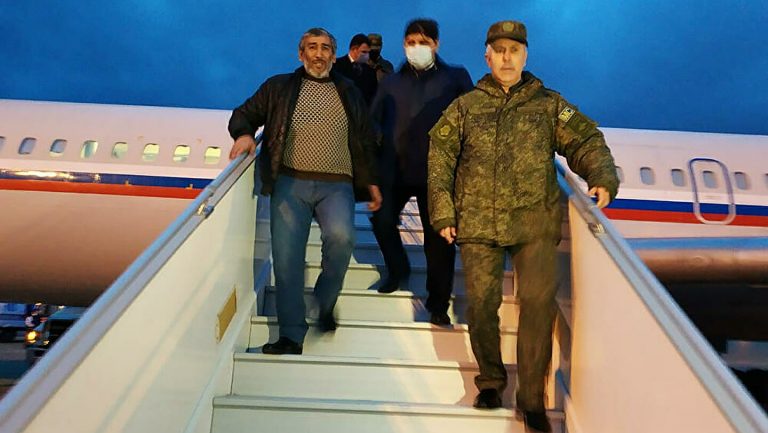 On Monday, Azerbaijan and Armenia held an exchange of prisoners and hostages. The official representative of the Russian Ministry of Defense, Igor Konashenkov, reported that the negotiations on the exchange of prisoners were personally led by the commander of the Russian peacekeepers in Nagorno-Karabakh, Lieutenant-General Rustam Muradov. It was noted that as a result of the agreements, 12 PoWs were returned to Azerbaijan, and 44 to Armenia. Konashenkov noted that the commander of the Russian peacekeeping contingent brought them back home to Baku and Yerevan, respectively, on a Russian Air Force plane. The State Commission of Azerbaijan for PoWs, Hostages, and Missing Persons reported that on Monday, the Azerbaijani citizens that were held captive were brought to Baku, including Shahbaz Guliyev and Dilgam Asgarov, held by Armenia since 2014. «After the quarantine measures, the released persons will be reunited with their families» — the ministry reported. The Deputy Prime Minister of Armenia, Tigran Avinyan, stated on Facebook that currently only the persons, whose captivity status was confirmed by the representatives of the International Committee of the Red Cross and Azerbaijan, are being given back. He added that the search of the missing persons, and return of other compatriots, who may be in captivity, is still on-going.

On Monday, during the yearly press conference, the Iranian President Hassan Rouhani stated that Iran is ready to fully implement the Joint Comprehensive Action Plan. He confirmed the previously voiced position that «if the US President-elect Joe Biden returns to the situation before 2018 — Tehran will return to the full implementation of the provisions of the nuclear deal». Washington left the JCPOA back in May of 2018. The Iranian President added that Iran can return to the JCPOA without the participation of the USA. According to him, the Iranian government will immediately return to the full implementation of the nuclear deal as soon as other parties of the agreement — Russia, China, Germany, Britain and France, begin to fulfill their own obligations.

On Monday, the USA imposed sanctions against the Turkish Defense Industry Authority, its head Ismail Demir, and 3 more Turkish citizens due to the law on countering of America’s adversaries via sanctions — the US Treasury Department reported. The sanctions were imposed due to the Turkish purchase of the Russian AA missile systems S-400s. The US secretary of State Mike Pompeo stated that the USA «won’t tolerate any significant transactions with the Russian defense and intelligence sector». He called on Turkey to immediately resolve the «S-400s problem» together with the USA. The Turkish Foreign Ministry stated that Ankara will respond to the imposed sanctions. The Foreign Ministry added that “Turkey, at its own discretion, will take the necessary steps against this decision that will negatively affect the relations between Ankara and Washington. Turkey won’t refrain from taking measures it deems necessary to ensure its own national security. Turkey is ready to address the issue via a dialogue and diplomacy» — the Turkish Foreign Ministry stated.

The Afghan TV channel ’TOLOnews’ reported that a group of unknown men attacked a checkpoint in the Bagram district, in the Kabul province, in the eastern Afghanistan. It was reported that 1 police officer was killed and 2 were injured. No information was given about the condition of the victims. No terrorist group has claimed the responsibility for the attack so far. The ’1TV’ reported on Twitter that an explosion of a magnetic bomb in the Macrorian Char area, in the city of Kabul, killed the deputy governor of the capital province, and his secretary.

The NATO countries do not agree with the Treaty on the Prohibition of Nuclear Weapons — the NATO reported on Tuesday in Brussels. According to the NATO, the document contradicts the current disarmament system. “We confirm our commitment to the maintenance and enhancement of the arms control, disarmament, and the non-proliferation. As the Nuclear Weapons Ban Treaty nears entry into force, we collectively declare our disagreement with the treaty. It doesn’t reflect the increasingly complex international security matters, and it contradicts the current system of the non-proliferation and disarmament» — the statement explained and added that «the Treaty on the Non-Proliferation of Nuclear Weapons remains the only reliable path for the nuclear disarmament».