The Militants in Syria block checkpoints 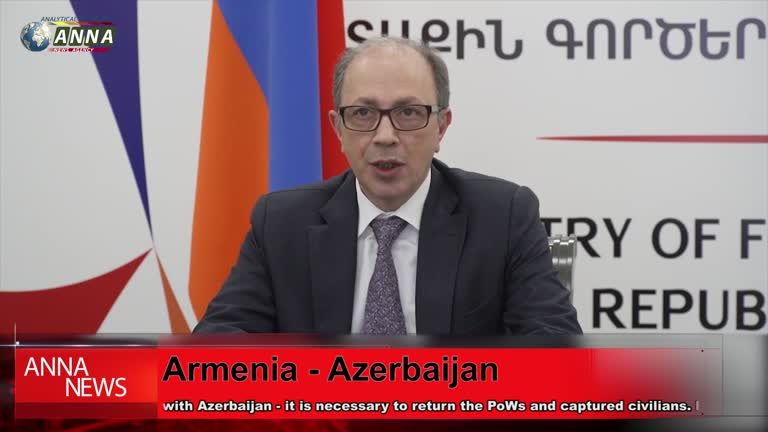 The Militants in Syria block checkpoints

On Saturday, the Russian Center for the Reconciliation of the Warring Parties in Syria announced that the terrorists that operate on the Turkish-controlled part of Syria, are preventing the locals from leaving the area via the ’Seraqab’ and ’Miznas’ checkpoints in the Idlib province, and via the ’Abu Zeidin’ checkpoint in the Aleppo province. «They block the movement of people and vehicles under threat of force and arrest. The terrorists set up ambushes on the roads leading to the checkpoints, and they also hold rallies of their supporters in order to disrupt the work of the humanitarian corridors» — the Center specified.

The Armenian Foreign Minister Ara Ayvazyan stated during a meeting of the parliamentary committee on the foreign relations that a meeting between the foreign ministers of Armenia and Azerbaijan, dedicated to the continuation of the settlement of the Nagorno-Karabakh conflict, isn’t being planned at the moment. He explained that on 1st of April he will head to Moscow to participate in a meeting of the Council of Foreign Ministers of the CIS countries. He noted that a meeting with the Azerbaijani Foreign Minister isn’t being planned at the moment. «During the future meeting there will be negotiations with different partners» — Ara Ayvazyan added and underlined that in order to restore the relations with Azerbaijan — it is necessary to return the PoWs and captured civilians. He stated that Yerevan expects Ankara to reconsider their aggressive policy, and stop the hostile actions, in order to establish peace in the region. Ara Ayvazyan concluded that Yerevan isn’t looking for enemies, and Yerevan knows the price of the peace.

The US State Secretary, Anthony Blinken, stated during an interview to the CNN that Washington is listening to the position of the European NATO partners on the matter of pulling of the troops from Afghanistan. He added that at the moment there are more servicemen from the European NATO countries in Afghanistan than the US troops. He added that the USA intend to pull their troops from Afghanistan at a suitable moment. The USA are currently focused on the deadline at 1st of May. «At the same time, we needed to boost the diplomatic efforts, because at the end of the day — everyone recognizes that there is no possible military solution to the situation in Afghanistan. It is necessary to come to a political settlement that would be reached by both sides» — Anthony Blinken concluded.

The ’Times of India’ reported that 11 protesters were killed and 10 were injured during the clashes with the police in Bangladesh over the past weekend. The protests were organized by the radical Muslim organizations against the visit of the Indian Prime Minister, Narendra Modi, during the 50th anniversary of independence of Bangladesh from Pakistan, on 26th of March. The most violent clashes took place on Sunday in the capital of the country. The protesters attacked the government offices, Hindu temples, and passenger trains. They set buses on fire and pelted the police with stones. The police were forced to use tear gas and rubber bullets.

The Association for the Relief of the Political Prisoners in Myanmar reported on Twitter that since 1st of February, 459 people have died in clashes between the local protesters and the police. It was noted that since 1st of February, 2,559 citizens have been detained. Arrest warrants were issued against 119 people. Earlier the local media reported that on Saturday, during the dispersal of the protests in various cities in Myanmar, at least 102 people were killed. According to the mass media reports — the total number of victims during the entire period of the protests reached 429.

An explosion of an IED, installed near a road in the Somali capital, Mogadishu, killed 5 people, the local mass media reported. It was noted that the target of the terrorist attack was a high-ranking military officer. No information about him was given so far. It was noted that the victims were mostly women. Constantine Reztsov, specially for the ANNA NEWS.